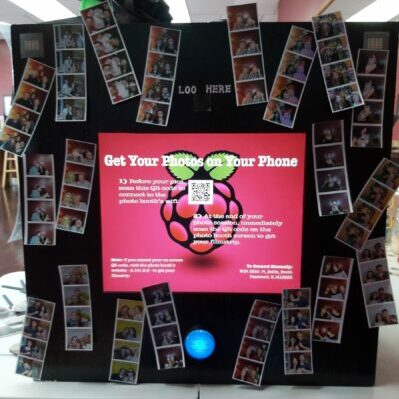 This is just another Raspberry Pi Photo Booth. I can’t say this is my idea because I used this Instructables as inspiration. I can say that I’ve modified the software to suit my needs. Plus I added few features. Because I used what I had laying around, there was some improvising needed.

This is a pretty simple and effective process. So on with my build.

My Photo Booth started as a rough box. Because I didn’t have all the parts used in the Instructables, I improvised and used what I had laying around. I used a Raspberry Pi model B and a 17″ 5:4 monitor. I didn’t have a WIFI adapter so I used a old WIFI router. After loading the software provided in the Instructables the photo booth mostly working. The four things I had to fix were:

To fix the 404 error generated by the QR code, I had to edit the combine script to have the correct IP address. Then to replace the touch screen start with a pushbutton start I had to edit and add code to the photo booth control file. For the change in screen size I edited the screen dimensions in the photo booth control file. And after a bunch of research I found that I could create a Raspberry Pi GPIO pin to control a flash, more to follow.

Since I had almost 100 surface mount ultra bright white LEDs from another project, I decided to use them. The GPIO flash pin on the Raspberry Pi is 3.3 volt signal. So I designed the following circuit board for the flash modules.

Note: The Pi’s GPIO can’t control a standard xenon flash or high current LED flash without some additional circuitry. So be careful how you use the flash pin. Notice I use a transistor as a switch to drive the LEDs.

With the flash modules completed I had to enable the Raspberry Pi GPIO to control it. There had to be a better way to control a GPIO pin during image capture than manually. So after some research I found picamera documents. This document described how to setup a GPIO pin to control a flash during image capture. Once done simply add one line to the variables of the python script (cam.flash_mode = ‘on’) and the flash will work.

You can use any of the flash modes found on a point and shoot camera. Because I didn’t what a selector switch, I coded the flash to “on”. Whether needed or not the “on” setting will blink the flash twice for every image captured. The first blink is for metering and the second is for image capture. These are the available flash modes, “off”, “auto”, “on”, “redeye”, “fillin”, and “torch”. My flash works very well set to “on”.

Rev.0 of the photo booth took these sample filmstrips in a fairly dark room. A five foot tall standing lamp next to the photo booth provides just enough light to see the count down to a fun filmstrip. So as you can see the two flash modules do a nice job illuminating the scene.

My rev.1 Photo Booth has a new brain. This version has a Raspberry Pi 3A+ to improve processing power for the added green screen effect. The control software now checks the status of the green screen button. Button status determines if I’m using a green screen or not. I can’t wait to use the new green screen feature.

I also added a button and a few lines of code to generate a setup preview. As a result, I can get the photo booth and backdrop setup correctly. My best friend recommended this preview function. I have to say it was a great idea and works great too.

About the author: Paul